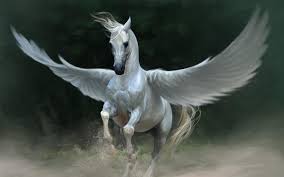 I’ve known Karen and her family for a number of years. David and Karen have two great children Shawnah  and Adam who live in the glorious mountains in Pine Junction, Colorado, not far from Denver. Karen’s father was one of the few survivors of the Auschwitz Nazi concentration Camp during World War II. His experience is another important story for another day.

Because the Christian community knows so little about the Jewish world, believers often assume that Jews know nothing about divine interventions – even thought the Old Testament is packed with such stories. Karen is an example of how heaven still meets earth in her Jewish home.

At seven years of age, Karen had a dream that was repeated for years. Her mother was a highly insensitive person and in the dream opened a door that led to burning lava. Finally, Karen came to a door that opened out on to a corridor leading on an airplane runway. A voice said, “Get on.” Suddenly a beautiful white Pegasus horse landed and Karen climbed on and flew away from her dysfunctional family.

As she matured, Karen came to recognize that the voice was from an angel and the Pegasus horse was an angel. These dreams were the beginning of a continuing sense of guidance and divine contact. Later, a sense of direction developed from verbal messages she heard like ideas racing across her mind.

Thoughts would suddenly appear like “take the umbrella today” or “don’t wear those shoes.” In time, Karen realized she had a guardian angel who protected her. Sometimes, the angel would whisper a message. If she didn’t respond rapidly, repetition occurred that became increasingly louder. Karen often puts her hands up to let the angel knows she was paying attention.

Some years ago as Karen pulled into a synagogue, a strong angelic voice told her where to park. She argued that she could find a better place, but the angel persisted. Consequently, Karen took the appointed place whether she liked it or not. After the synagogue service, she met David for the first time. He helped her with her coat and walked her to her car. To her astonishment, Karen she was parked next to him!

The angelic directive resulted in Shawnah and Adam, living happy ever after today.

I believe everyone has a “guardian angel” who can make all the difference in our lives. Karen would suggest that we should pay attention to our dreams and random thoughts. We might just be at the right place to tune in for divine intervention.