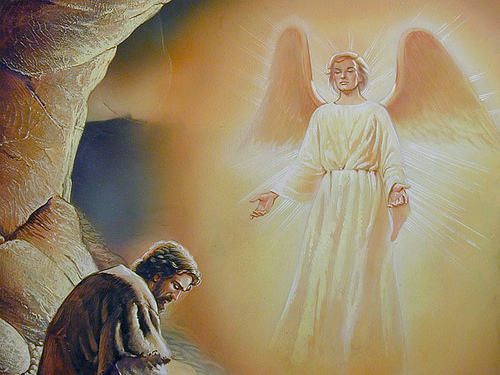 I have a new weekly radio broadcast over the internet
www.blogtalkradio.com/miraclesnow
Then: Miracles with Robert Wise
TUNE IN ON THE INTERNET

Let’s step back from contemporary stories and put what I’ve been reporting in Biblical perspective. People often forget to look for how the miraculous revealed God’s plans. For example, consider the history of the Jewish people.

The Old Testament is filled with many incidences when the grace of God restored life. For example, the accounts of Elijah and Elisha demonstrated the work of miracles. When Elijah defeated the prophets of Baal on Mount Carmel, fire fell from heaven. This was followed by the miracle of the return of rain that ended a terrible drought. These were examples of miracles of nature where the elements of natural process were affected by the hand of God. The book of II Kings begins with the story of an angel speaking to Elijah (II Kings 1:15) The Old Testament was keenly aware of incidents when angels were involved. We might call these angelic miracles. These events displayed that God continually works in human history. He will use whatever is at hand whether it be the poorest of the poor or slaves in captivity.

The authority of Elijah was passed on to Elisha. Immediately Elisha brought healing to the water supply of the city of Jericho. Again, a miracle of nature. (II Kings 2:19-22). This event was followed by the miracle of the increase of the window’s oil. (II Kings 4:1-7). Perhaps, the most dramatic event was the healing and restoration of the Shunammite’s son who had died. The scripture is clear that the boy was dead, but Elisha covered the boy’s body with himself and the lad was soon alive. Elisha was involved in a miracle of the restoration of life, a resurrection. (I Kings 4:32-37). Elisha’s ministry continued with many such events. Each of these occurrences were examples of redemption.

The Passover celebration marks the extraordinary happenings when the entire nation of Israel was saved from the army of Egypt. The Sea of Reeds (The Red Sea) parted so Israel could cross and closed in on Pharaoh’s military, wiping the army out. The point is that the Jewish people knew well that their history was a story of God bringing justice and equity into the world.

These were not slight-of-hand tricks performed in the desert. Each event was in someway tied to the long range plan of God. In our quest to understand the miraculous, we must keep this history in mind and ponder what it tells us about our own needs. Some of those purposes were understood immediately; others became clear only in retrospect. A few transcended the centuries and are still pondered today. Three thousand years later, scholars still attempt to fathom the full meaning, the nature, and lessons of the Exodus. All of these historic interventions are demonstrations of a divine blueprint for creation.

Your life is part of that plan.

For help with struggles: get a new copy
WHERE THERE IS NO MIRACLE
Robert Wise’s classic on overcoming tragedy