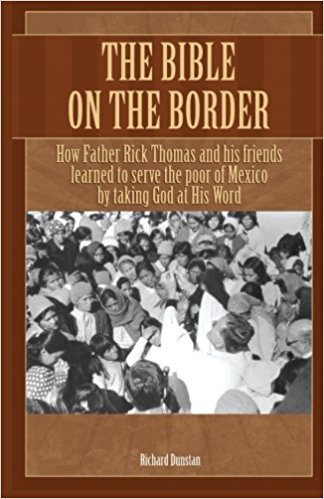 In the last blog, I shared the amazing story of Father Rick Thomas feeding 500 people with food for 150. Quite a story! With a charismatic orientation, Fr. Thomas’s Youth center exists to reach need wherever it occurs. Volunteers work in the Juarez municipal jails and mental hospital. The men preach like Billy Graham with invitations to kneel and pray. Often half the prisoners do so.

The mental hospital offers its own challenge and many times the patients are resistant. Thomas’s volunteers don’t give up easily. After people are prayed for, many are released much earlier than expected. The ministry and miracles continue.

The point is simple. They all participate. Fr. Thomas’s ministry does what’s needed to help the poor and needy. He and his friends do God’s will. In the process of ministry, the heavenly Father provides what they need to do the work. Complicated? Actually, the procedure is simple. Do it and He takes care of the rest.

From 1969 to 1970, the Charismatic Movement swept through El Paso. A new emphasis on the Holy Spirit emphasized personal encounter and Thomas found a value in the scripture that he had not recognized earlier. His group began studying the scripture earnestly. From their deliberations came the principle that has guided their work ever since: Obedience. Everything from working in the city garbage dump to visiting the jails is guided by being faithful, not to any human authority, but to God alone. While many Christians recognize this principle, Fr. Thomas’s staff expect their obedience to take a specific form. Going to the jails or the city dump are examples of precise leading. When they follow these directions, the divine interventions show up.

Their response to the scripture has a specific orientation. Many fundamentalists groups take the Bible literally, but they do so with an eye to the past. They maintain certainty about what God did yesterday. Fr. Rick’s approach is to take scripture with equal seriousness but seeing it as a guide to today. The goal is to live out what is found in the Bible.

When the group studied Luke 14, they noticed that as Jesus was describing a banquet, he spoke of sharing. The word “sharing” suggested a different approach than “giving.” The scripture imparted the idea of sitting down together. Consequently, they set out not just to be the good guys but to do exactly what the passage described. Bingo! The multiplication of food followed. Fr. Thomas believed it is important to perform concrete expressions of the faith. Saying we believe in caring for the poor is fine but no one is fed. The act of actually sharing food makes the difference. The answer is in doing, not saying.

Fr. Thomas’s experience taught him the Bible is a source of God’s power. Consequently, the Bible is used to perform God’s will. Fr. Rick’s group found that the scripture can be like a chisel that keeps chipping away at a rock until a new shape emerges. Repetition of key passages seems to crack open the hardest rock.

Fr. Thomas discovered that scripture was extremely important when they dwelt with occult influence. Strange as it may sound to many middle-class Americans, when ministry reaches to the bottom of the human ladder where brokenness and poverty abound, there too the occult flourishes. Fr. Thomas found that Psalm 52 was important in these circumstances. Verses three and four say: “You love evil more than good, and lying more than speaking the truth. You love all words that devour, O deceitful tongue.” The entire chapter confronts the plans of evil and refutes them. Scripture can help break the hold of Evil.

Remember we have a new website! You’ll find this helpful.

Surveying the first 3 centuries, we are examining the ancient Christian faith.

The focus is practical, relevant, and inspirational. TUNE IN